12.04.15By LeonardTweet
Posted by Leonard Steinberg on December 4th, 2015
(excerpt from my daily COMPASS CONTEMPLATION) 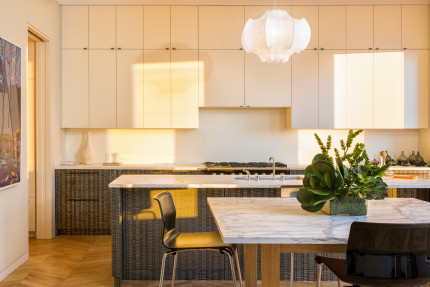 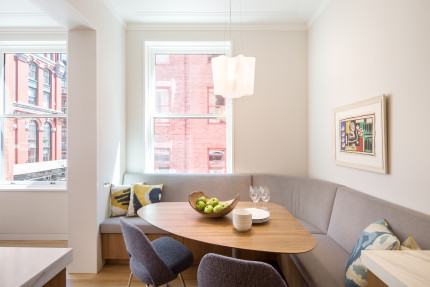 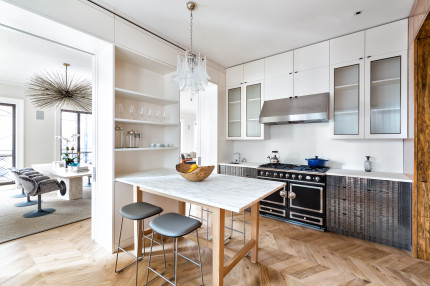 The debate between an open or closed off kitchen design has raged over the past two decades with almost evenly divided camps. Some feel an open kitchen is much more conducive to healthy interaction between the host (who may be cooking and cleaning) and guests or other members of the family, while others feel the intrusion, mess, smells and noise of a kitchen are best left behind closed doors. Now there is an alternative: the open-and-closed kitchen.
Recently, Ian Schrager launched a new building at 160 Leroy that demonstrates this concept clearly: as part of the ‘great room’ or major entertaining space is an open kitchen with an island for casual entertaining/cooking…..called the ‘social’ kitchen. Tucked alongside this behind closed doors is a prep kitchen with all the messy stuff, including a pantry. We have been doing this for some time now, starting the trend with our magnificent penthouse at 560 West 24th Street in West Chelsea designed by Steven Harris. We termed the ‘messy kitchen’ a SCULLERY, an area that contained a sink for dirty dishes and all the stuff you’d rather not see on a regular basis. We did a similar version in the superb penthouse at Seven Harrison Street (just awarded APARTMENT OF THE YEAR by INTERIOR DESIGN MAGAZINE)where the large open kitchen is perfect for informal entertaining and a scullery hides all the messy stuff out of sight.
At 560 West 24th Street, the kitchens in the regular full floor apartments have two large openings that contain pocket doors. The kitchen is almost fully exposed, yet closes off completely when desired. Adding a dining element into the kitchen in the form of a centered counter with 4 chairs allows in-kitchen casual dining. A similar concept can be achieved by including a banquette which has become extremely popular again.
Another solution for those wanting to expose a kitchen when desired, but hide it when not, appeared 8 years ago in the Annabelle Selldorf-designed kitchens at 200 Eleventh Avenue which feature large folding Teak doors that appear to be wood panelling when the kitchen is not in use and fold away to reveal a stainless working kitchen when in use.
The evolution of the kitchen continues.

This entry was posted on Friday, December 4th, 2015 at 12:23 pm and is filed under Uncategorized. You can follow any responses to this entry through the RSS 2.0 feed.