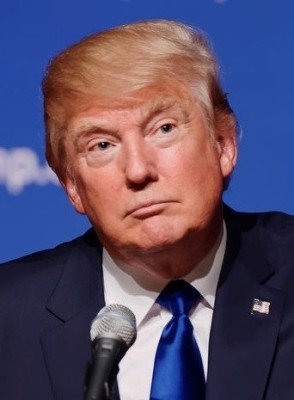 Posted by Leonard Steinberg on March 26th, 2016
Donald Trump has made a spectacular ascent to power. His marketing methods are in many ways a reflection of the shifting trends of our society in general and new marketing methods employed by some. This essay is in no way an endorsement or denouncement of any presidential candidate. Its simply some observations of a marketing style worth noting, like it or not.
SIMPLE-SPEAK:  Trump’s simple speaking style resonates. It is understood by everyone. He does not use big words or adjectives. He does not dig in deep. He speaks in sound-bites that the world is all too happy to repeat, especially the media.
REPEAT, REPEAT, REPEAT:  Repetition is the key to effectively getting your message heard in a crowded marketplace. Trump repeats simple messages again and again and again….until his messages become the defining vocabulary of the moment.
SCANDAL SELLS: Trump has mastered the value of the controversial sound-bite: these are the ones the media love as they drive ratings. Salacious headlines attract attention just the way sex used to. These days with nudity and sex being much less scandalous than 20 years ago, controversy has become as effective. The media loves selecting the most scandalous of all comments. Even the mere suggestion of the possibility of a scandal beats out all other comments. Scandal sells.
CELEBRITY-OBSESSION:  Our ‘Kartrashian Society’ is obsessed with celebrity, even C-listers. Trump’s hugely successful APPRENTICE has made him a world-famous, household name. Masses of people are familiar with him. His image is aspirational to many and the private planes, penthouses and posh life appeal to many. Even the most conservative, prestigious media outlets will prioritize writing about a celebrity over many more substantive items.
SPEAK YOUR AUDIENCE’S LANGUAGE: If you know your audience well, speak to them using their language. Use content that appeals to them most. Address their aspirations, fears and concerns.
BE BRAND CONSISTENT: Never stray from your brand so that those who are loyal to you are never disappointed.
FEAR: I once heard a real estate agent say to a client they would be ‘either with us or against us’. Intimidation can work in some marketing styles. I don’t like it at all, but can be very effective with some.
SOCIAL MEDIA IS CHEAP: Tweets are big and cheap and effective. Social media allows you to make big, bold statements world-wide without being questioned initially. It allows you to create an image that may be better than reality. With lots of messages many are forgotten or forgiven.
WINNERS AND LOSERS:  Everyone loves the winning team. Most people love sports. Trump makes winning everything. He celebrates success with huge aplomb and downplays any failures or mis-steps. Many people want to be with the winning team. We live in a ratings- and scorings-obsessed world.
I would in no way encourage real estate marketers to incorporate all of these marketing methods, but they are worth noting to better understand our changing world.

This entry was posted on Saturday, March 26th, 2016 at 7:49 pm and is filed under Uncategorized. You can follow any responses to this entry through the RSS 2.0 feed.